Prestressing application in water storage tanks and reservoirs is commonplace all over the world.

The additional benefit to this approach is that there is a reduction in the reinforcement quantity, which is typically used to enhance the tensile strength of a reinforced concrete section.

There are 3 common approaches to using post-tension in-tank installation:

Overview of the Tank in Asse

Interspan Europe has been involved in the post-tensioning of a water tank in Asse, Belgium. The tank has been designed by Stael Constr. & Engineering Services, and is being delivered by Franki Construct NV.

A slipform system from Bitschnau was used to execute the water tank, where the formwork is continuously raised by hydraulic jacks. This is a typical construction, given that the use of a slip mitigates water-tightness issues associated with jointing.

Two platforms were used in the formwork system – the upper platform which was the working level above the poured concrete, and a lower level which provided access for concrete finishing. The total height of the slip in Asse was 16.5m.

Using a slipform system meant a continuous 24h work presence from the concreter, steel-fixer and post-tension subcontractors for the full 5-day duration. 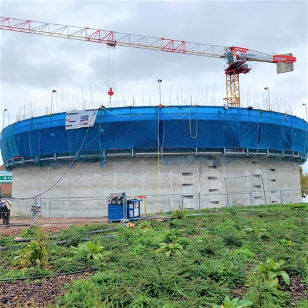 Contrary to typical post-tension tank applications, the tank in Asse did not contain a buttress on each side of the tank for stressing access. This was a conscious decision from the engineer given that the tank was to appear like the adjacent tank which opened in October 2019; and has a capacity of 17 million litres. The result of this was carefully coordinated stressing pans present on both the east and west elevations of the structure, with almost 1 meter between stressing pans centrelines despite tendon layers being at <250mm centres for the lower half of the structure.

Figure 2: Pans allow for stressing on the outside face of the concrete

The coordination of the stressing pans due to the lack of buttress and the limit placed on the number of strand per tendon due to the effective section width at the stressing pans meant there was a requirement for them to be pushed from both the east and west side of the structure. Cable pushers were present at ground level on both the east and west elevations. They were used as pushing support for the unbonded cable up to the top deck of the formwork allowing the operatives to feed the 65m strands onto the cast in metal chairs. Given the slipform nature of the scheme, this was a continuous operation which required different teams working on rotation for the full 5 days.

Upon completion of the slip, the formwork system is removed. Once the final concrete batch has reached strength, the final stressing operation will be carried out using a stressing jack.

Following the engineer’s approval, the tendons will be cut and sealed. 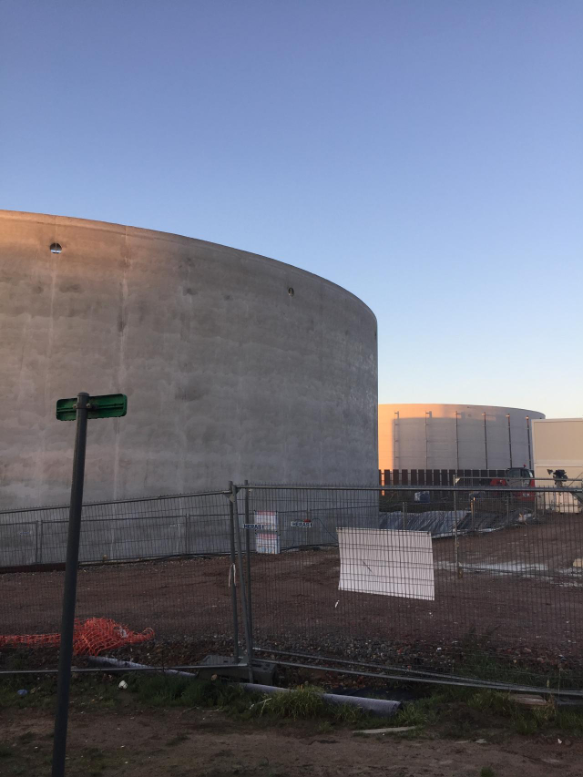 About Us
Overview
Leadership
What is post tension
Qualifications